Our client was a leading manufacturer of a range of custom metal components used in the manufacture of heavy trucks. The business was profitable, highly successful and well regarded by its customers. However following the global financial crisis of 2008-2009, volumes of heavy truck being manufactured dropped sharply. As a result our client suffered a sharp drop in sales. The owners of the business recognised that the downturn provided them with an opportunity to reassess improve manufacturing operations in order to better equip the business to capitalise on an expected recovery in the market. 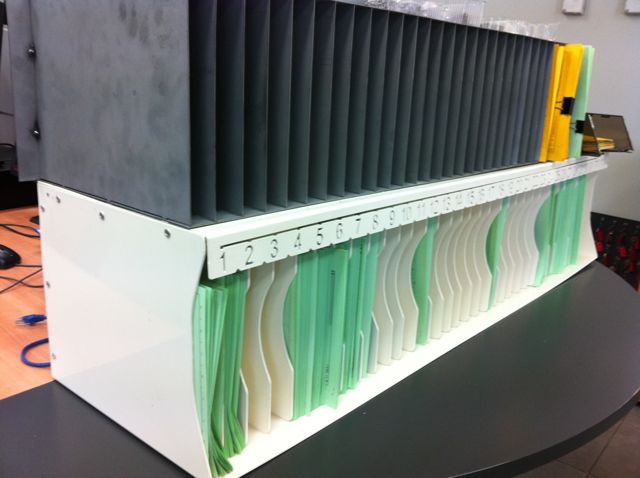 Load Levelling (Heijunka) Box used to control and level the release of work to production.


Heavy truck manufacturers had implemented lean concepts for some time. Components were supplied on a just-in-time basis with suppliers being required to assemble parts in to kits that were supplied directly on to the truck assembly line to match the sequence of vehicles being built. Our customer struggled daily to meet these just in time call ups. Long lead times and a “push” approach to manufacturing sub-assemblies often meant that the customer requirements were only met through constant expediting.  A large team of supervisors and expeditors spent their day chasing jobs through the factory and the owner of the business revealed that his main personal goal for the business was “less stress”. It was certainly a very stressful and pressured environment.

Finally, despite a relatively recent relocation to a large new site, space was already at a premium and becoming a constraint on growth.

The TXM team started by mapping the end to end flow for key custom parts using the Manufacturing Agility Process. This revealed issues with long queuing times at folding, welding and assembly. Final assembly processes were redesigned with Kanban replenishment ensuring that parts were made in time for final assembly. First in First Out (FIFO) lanes controlled the backlogs in folding and welding to ensure that lead times were kept down and processes balanced.

The business had already implemented some production cells, but these were improved with kanban supply of parts and other cells were created leveraging TXM’s expertise in creating work cells for customised and bespoke products.

Improved layout of the assembly area saved around 1000m2 in space enabling an additional production cell to be accommodated. Kanban systems ensured that interruptions in final assembly and expediting of components was eliminated. Controlling the lead time using FIFO and controlling the release of work to production enabled lead times to be reduced from around one month to less than one week. This meant that just in time supply to key customers could be achieved without expediting.

Most impressively though, the Lean production system freed up capacity, space and management time to focus on growing the business. As well the business became a more reliable supplier to its key heavy truck customers. As a result revenue doubled in the following five years through winning more programs from the heavy truck customers as well as expanding in to new markets. The client is now recognised for their expertise and the efficiency of their operations making them a partner of choice for companies looking to outsource their metal manufacturing operations.